Just more than 9,000 people live in Aliquippa. It was once the economic heart of Beaver County, but the collapse of steel in the late 1980s and early 1990s decimated the city. Some people say Aliquippa’s been dying a slow death ever since, but its leaders disagree.

Inside Aliquippa’s city building is a mural. A pouring ladle tips out molten yellow letters to spell “Aliquippa” in red and black, and underneath is the city’s slogan, written in cursive: “Founded by steel, formed by its people.”

Mayor Dwan Walker was sitting next to that mural when he got the call about a $3.3 million grant from Pennsylvania’s Neighborhood Partnership Program. It was a few days before Christmas, late in the morning, when the number of the regional director of the Department of Community and Economic Development’s popped up on his cell phone. 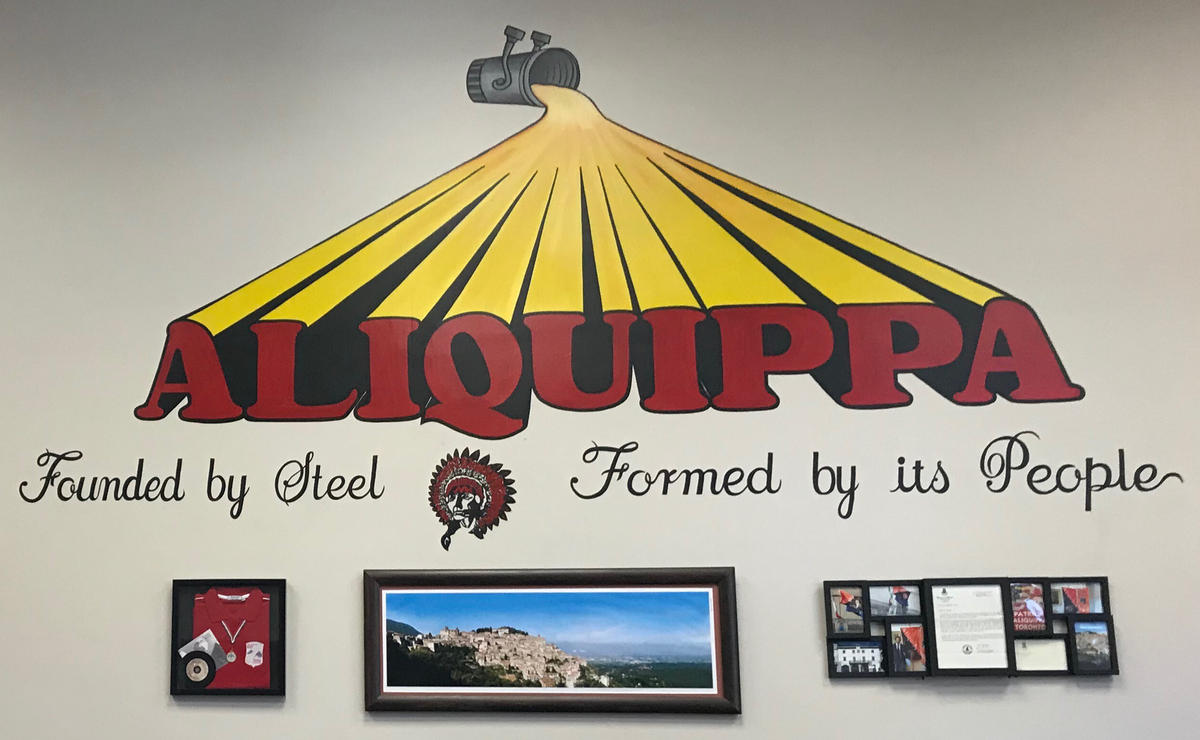 A mural adorns a wall inside the city administration in Aliquippa.
CREDIT MARGARET J. KRAUSS / 90.5 WESA

Walker looked at the number and was certain it was bad news. He picked up anyway.

But the woman on the other line had different news.

He said he couldn’t quite believe it; he made her promise she wasn’t joking.

“‘Dwan, Mayor Walker. Everybody up here’s talking about it. You got it,'” he recalled her saying.

That phone call was the culmination of nearly two years of work spent positioning the city to compete for the money. Being the mayor of Aliquippa pays $175 per month, so all the meetings and phone calls and planning happened on top of Walker’s full-time job at Guardian Protection Services. Getting the phone call was a huge moment, he said.

“I don’t care if you’re the biggest man in the world, I cried. Literally cried,” he said. “Broke down. Done.”

Walker immediately jumped off the phone so he could call his brother, Councilman Donald Walker, who also chairs the Aliquippa Economic Development Corporation. Donald couldn’t believe it either.

Walker and Walker, mayor and councilman, are twin brothers. They respectfully take turns speaking, gesturing to yield to one another. But sometimes they can’t help themselves; they get excited and talk together. They first ran for office in 2011, propelled by the death of their sister; she was murdered in 2009. They wanted to change the city and they ran on a new slogan: “One Aliquippa, All Hands On Deck.”

“A city like ours, the only way this city can get back is all hands on deck. The only way the city can survive is all of us coming together,” Dwan said. “We’re not looking for a hand down, we want you to walk alongside us.”

The first priority is tackling blight. On a chilly but sunny Thursday afternoon, Mayor Walker put his hazards on in order to crawl down Franklin Avenue in the heart of the city. He pointed out buildings they have to tear down: a collapsed building where mill workers use to pick up their paychecks, an old hotel, a boarded up building that used to house a catering company and a couple other businesses.

They’re not demolition happy, though. After 20 years of neglect, a lot of buildings are falling down. By clearing them they hope to attract new housing developers and businesses.

Turning toward the Ohio River, Mayor Walker drove through a tunnel to the 7-mile stretch of riverbank where the J&L steel mill used to be. He pulled off the road into a field and both brothers got out of the car, remembering what used to be in the empty space.

“The 10-inch rolling mill. My dad used to work here, my grandfather,” he said. “This whole thing was jobs.”

At its peak, the mill employed close to 17,000 people. When it closed, it leveled lives. Today, nearly 30 percent of Aliquippa’s residents live below the poverty line. The mill buildings and the jobs they provided are long gone. And while standing in that vast, empty space puts Aliquippa’s current circumstances in context, both Walkers say they’re tired of talking about the storied past.

The state grant is a start. It will allow Aliquippa and its partners to spruce up the streets, but also to invest in residents, helping them to prepare for new jobs and future opportunities. That investment is crucial because the Walkers, Beaver County and the state of Pennsylvania soon expect to see other kinds of investment at the former mill site and in the region.

“The fact that Aliquippa is a city in close proximity to that, we think that presents some opportunities,” he said.

Shell’s impact is expected to be so big the county doesn’t fully have its arms around it yet, said Jim Palmer of the Beaver County Corporation for Economic Development. But he said Aliquippa’s leadership seems poised to capitalize on whatever benefits the plant may provide.

It’s the Walkers’ all-hands-on-deck-slogan in action. Aliquippa will create a digital media lab in its library, as well as bring a nonprofit job training program downtown so it’s accessible to people with few transit options. The city is also partnering with the Salvation Army to provide emergency food assistance to the community’s most vulnerable residents.

Thousands of people left Aliquippa when the steel industry collapsed, and the people who stayed deserve to see the benefit of new opportunities, said Councilman Donald Walker.

“Aliquippa is a special place, man, it’s a special place,” he said. “I think a lot of times towns like Aliquippa…they don’t get the understanding that they should as far as what goes on here, and how towns like ours are important. As far as the fabric of the United States of America.”

Aliquippa will never be what it was, they say. But the Walkers are hoping to help people imagine something new.